There was a story told about a well-digger who in digging for water on East Mountain, reached 43- feet;  when to his amazement the bottom fell out and he slid down the well shaft landing on Main Street.  In redesigning his well, he had to dig upwards from his cottage in order to strike water. 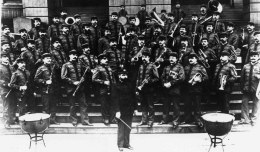 
In 1928, Mayor Claude A. Fuller lead the construction of the entertainment facility that has come to be known as "The Aud."  The first performance in The Auditorium was John Phillip Sousa and his 67-piece band.


From its early beginnings, Eureka Springs was unique in having its very first mayor impeached for fraudulence.
And strife immediately occurred between the "Silk Stockings" and the "Mohawks."  Terms that were used to differentiate between the wealthier residents on West Mountain in opposition to the less fortunate squatters on East Mountain and the bar owners and shopkeepers of  Main Street.